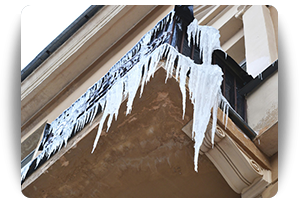 Cleveland’s winters tend to alternate between the very cold and snowy and the rather mild and manageable. During particularly cold winters with heavy snowfall accumulations, homeowners can find themselves facing a large number of roofing problems that could lead to serious injury and major problems in the home. For those who are new to homeownership or those who have never considered winter’s impact on their home’s roof, it’s worth reviewing these potential pitfalls in order to avoid them and find better solutions during the coldest months of the year.

Heavy snowfall accumulations, combined with the melting and refreezing process that often results in ice dams and other blockages, can actually block plumbing vents and keep things like gas stored within the home. This might not sound like such a big deal, but it can actually be a serious explosion risk for homeowners that could cause significant damage, major injuries, and even loss of life.

As water freezes and expands, and then warms up and contracts, it can crack the sealant that’s used around skylights and other roofing features. The result is a leak that could be quite damaging if left untreated. These leaks can contribute to mold growth, weaken the home’s supports, and even damage those items stored in attics where the leak is most likely to drain.

Storm after storm during the winter can leave the roof of a typical home bearing hundreds or even thousands of pounds of heavy, dense, half-melted snow. This can easily become a risk factor in roof collapses, since most roofing designs were made to handle such significant weight. Roofs can collapse at a moment’s notice, injuring homeowners and causing significant repair costs immediately afterward.

Cleveland homeowners should resist putting themselves at risk by either ignoring common winter roofing risks or attempting to fix the problem by themselves. At The Siding and Insulation Company, our team professionals can diagnose common winter roofing issues and fix them with greater ease and safety than most homeowners can do on their own. This helps to mitigate not only winter damage, but also the significant risk of personal injury that follows those homeowners who feel that they can tackle snow and ice in these challenging, slippery, and sloping environments. Get in touch with us today for a free estimate and a better way to handle the remnants of winter’s wrath.